Please use the navigation links on the left
to access a variety of pages containing information about my life and music.
Begin with the biography below.

The arts not only enrich our lives, but also grant us the opportunity to challenge accepted practices and assumptions. They give us a means of protest against that which we believe to be unjust; a voice to condemn the brute and the bully; a brief to advocate the cause of human dignity and self-respect; a rich and varied language through which we can express our national identity. The arts are not a luxury. They are as crucial to our well-being, to our very existence, as eating and breathing. Access to them should not be restricted to a privileged few. Nor are they the playground of the intelligentsia. The arts are for everyone and failure to include everyone diminishes us all.' Richard Attenborough 1994 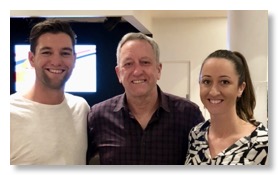 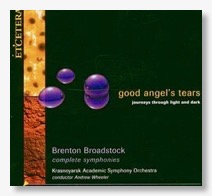 ‘Broadstock does not place elitist obstacles between himself and the listener.
His music speaks direct from the heart to the heart.
Stunning golden work radiating a sense of kindly exaltation with a blazing kinetic forward pulse.
Not newly released but a magnificent and vividly living achievement which I urge you to hear.
If you like to be sparing with your musical adventures then make this the set you buy in the near future.’

In January 2014 Brenton received an AM - Member of the Order of Australia - in the Australia Day Honours for “significant service to music as a composer, educator and mentor”.

In 1991 he signed a publishing contract with G. Schirmer, Australia (Music Sales). He has won numerous prizes for composition including First Prize in the 1981 Townsville Pacific Festival's National Composition Competition for his orchestral work Festive Overture; the Albert Maggs Award; two APRA Music Awards for his orchestral works The Mountain and Toward The Shining Light; First Prize in the Hambacher Preis International Composers' Competition, West Germany for his Tuba Concerto; and in 1994 he received the Paul Lowin Song Cycle Award, Australia's richest composition prize, for Bright Tracks for mezzo soprano and string trio. His orchestral work Stars In A Dark Night (Symphony #2) received four 'Sounds Australian' National Music Critics' Awards including 'Best Australian Orchestral Work in 1989' and was the Australian Broadcasting Corporation's entry to the prestigious Paris Rostrum of Composers in 1990. In 2001 he received the Australian Music Centre’s Victorian Award for Best Composition – Dark Side (Symphony #5), and in 2002 his Federation Flourish was nominated for an APRA/AMC “Orchestral Work of the Year”.

His music has been performed at many international festivals including The Stroud Festival, England; the 11th Berlin Biennale; the Festtage fur Musik in East Berlin; Darmstadt Summer School, West Germany; the Music Today Festival, Tokyo; the Hong Kong and Oslo World Music Days; Asian Music Festivals in Japan and Korea; Musica Nova Festival in Munich; the BBC Proms; the European Brass Band Championships in Birmingham; and in Australia at the Adelaide Festival, Musica Nova Festival, Brisbane; Summer Music, Moomba and Spoleto Festivals in Melbourne and the Townsville Pacific Festival. There have also been performances in England, Germany, New Zealand, Canada, Russia, Sweden, Spain and China.

Brenton has also written several major brass band works; he was commissioned to write Winds of Change, which was premiered at the 2000 European Brass Band Championships (available on CD) in Birmingham by the Yorkshire Building Society Brass Band, conducted by David King, and broadcast, on BBC Radio (see Reviews). This work was the A Grade Test Piece at the 2002 Australian Brass Band Championships held in Geelong. Brenton’s 30 minute work Gates of Day was premiered as the final work in the 2001 Melbourne International Festival of the Arts. Scored for 100 brass players (4 brass bands), military band (conducted by Graham Lloyd) and 400 bell-ringers playing 2001 bells, it was played at the outdoor Sidney Myer Music Bowl to an audience of several thousand.

In 2001 he was one of seven composers commissioned to compose a work, Jagged Tears, for the Field of Bells - a computer controlled interactive installation (a public music instrument) - at Birrarung Marr in Melbourne. Jagged Tears can be heard at 9am, 12.30pm and 5pm every day.

In 1988-89 he was the Melbourne Symphony Orchestra's Inaugural Composer In Residence. In 1997 he received the Jean Bogan Prize for his solo piano work Dying of the Light and in 1998 he received the Michelle Morrow Memorial Award for Composition and an Explorations Opera Project grant. In 1998 he spent three months in Italy on fellowships awarded by the Civitella Ranieri Foundation and a Bellagio Study Center Award from the Rockefeller Foundation. In November 2005 he returned to Italy as a fellow at the Ligurian Study Center in Bogliasco, Italy.

In 1999 he received the prestigious Don Banks Award from the Australia Council, for his contribution to Australian Music, which enabled him to compose for most of that year, including visits to the USA (Visiting Professor of Composition at Indiana University), England and Russia. His five symphonies were recorded by the Krasnoyarsk Symphony Orchestra (Russia) conducted by Andrew Wheeler and released on the Etcetera label in 2000 receiving excellent reviews in England and Australia (see Reviews). The CD was named as one of ‘The Recordings of the Year 2007’ by Music Web International editor Rob Barnett (see Reviews).

Brenton's solo piano work Torre di Forza was one of two Australian 'test' pieces commissioned for the 2004 Sydney International Piano Competition, and in 2005 ABC Classics released a CD of orchestral works performed by the Tasmanian Symphony Orchestra conducted by Ola Rudner (see Reviews). His chamber opera based on Ray Bradbury’s Fahrenheit 451 was performed in Bonn, Germany in April 2006.

Brenton has written 7 symphonies, concertos for tuba, piano, euphonium and saxophone, several orchestral works, a chamber opera, 4 string quartets and much chamber, choral and solo music. Over 60 compositions are available on 50 commercial CDs worldwide (see discography). In 2007 he was one of 4 musicians short-listed for the Melbourne Prize and he was appointed as a Vice Chancellor’s Fellow at the University of Melbourne.

From 2008 he has been a freelance composer and in 2009 was Composer in Residence with the Melbourne Symphony Orchestra. Recent works include a piece for 12 saxophones, Twelve, a concerto, Made In Heaven, for trumpeter James Morrison and a chamber ensemble work, Hall of Mirrors, for trombonist Brett Kelly. His sixth symphony, Tyranny of Distance, for orchestra (Melbourne Symphony Orchestra conducted by Warwick Stengards), soprano soloist (Merlyn Quaife), didgeridoo (Jaida Gulpilil), MSO Chorus/Jonathan Grieves-Smith and live visuals created and performed by Tim Gruchy, was premiered at the 2009 Melbourne International Festival of the Arts.

In November 2013 Brenton’s string orchestra work, Never Truly Lost, commissioned by Rob and Nancy Pallin, was toured around Australia by the Australian Chamber Orchestra with Satu Vänskä as solo violinist. In May 2014 Never Truly Lost was the ABCs entry to the International Rostrum of Composers held in Finland and was selected as a ‘recommended work’ (from 50 entries from 27 national radio networks).

In 2014 Brenton was a Creative Fellow at the State Library of Victoria (working on a new musical/opera with Mike Brady). He also received the Albert H Maggs Award and composed a new work, Syzygy, for the Syzygy Ensemble that is available on their first CD, Making Signs.

In 2016 Brenton was commissioned by Warren Lesnie to compose a string quartet, Safe Haven, for his wife Marianne and performed by the Enso Quartet (New York) in May/June during a tour promoted by Music Viva

In 2017 Brenton completed new commissions for the Plexus Ensemble, This Everlasting Silence, premiered at the Recital Centre, Melbourne in November; for the HD Duo, Hammerblow, premiered on their ‘Commonwealth Tour’ in 2018.
He also had the pleasure of working with comedian Simon Hall (aka Yon from Tripod) arranging the music for a 60 minute cabaret show - The Second Wedding Singer - premiered at the Adelaide Cabaret Festival in June 2017.

In 2020 his work Let There Be Light was one of four works chosen by the Tampa Bay Symphony, USA to be performed in January 2022.
In August 2020 his orchestral work In The Sunshine was performed by the Helsingborgs Symfoniorkester in Helsingborg, Sweden conducted by David Björkman.

In 2021 Brenton was selected by the Australian National Academy of Music to compose a solo trombone work, Memento, for Jarrod Callaghan.

Brenton has completed a new opera The Nurses at Vung Tau based on a story and libretto by Elizabeth Lewis about the Australian nurses in the Vietnam War that will premiere in June 2022 in Brisbane (see website for details and tickets).